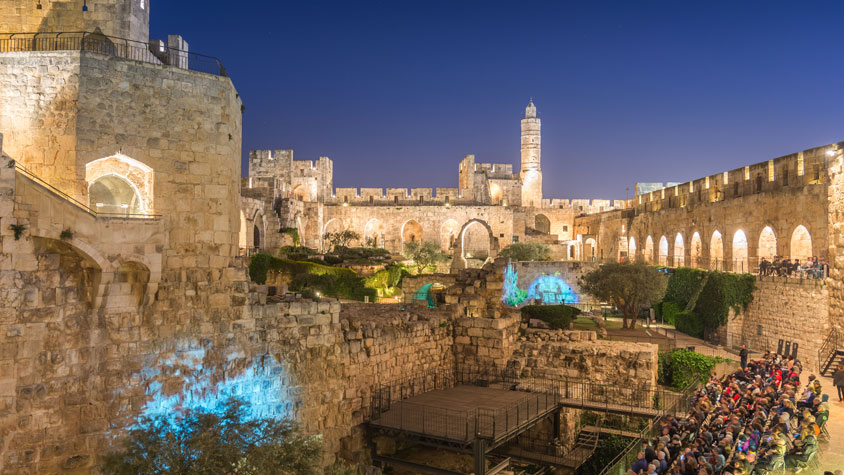 The Tower of David (also known as The Jerusalem Citadel) is one of Jerusalem’s most well-known and beloved national heritage sites, housing important archaeological ruins which date back almost 3,000 years.

Located just near the Jaffa Gate entrance, which leads to the western edge of Jerusalem’s Old City, the Tower of David was originally constructed in the 2nd century BC as a strategic stronghold for the city. Although the site has seen many conflicts and repeated reconstructions over the centuries, it now offers visitors a unique and breathtaking 360-degree view of the Jerusalem’s Old City as well as its modern areas. Visiting the Tower of David Museum is a feast for the senses, bringing Jerusalem’s history to life with a variety of tours, cultural events, and activities for all ages.

In addition to its permanent exhibition, the Tower of David also offers laser light shows in the evening, which combine past and present into a powerful presentation of light and sound projected onto the walls of the citadel. These shows are perfect for everyone!

The Kishle and King Herod’s Palace

Adjacent to the Tower of David complex lies the “Kishle”, a 1,500-foot arched structure that was a former British mandate prison. It can be accessed from the dry moat which surrounds the citadel or via a Crusader-era hall in the Museum. Begin your adventure by seeing the high walls built by Suleiman the Magnificent; discover the dye vats from the Crusader period; explore the lost palace of King Herod, which dates back 2,000 years; and finally, witness the remains of Jerusalem’s first fortifications, built by Judean Kings in the First Temple Period – all in one place!

It is often said about the Tower of David, that “David didn’t build it, David never saw it, and David never slept there.” While the citadel has no connection to King David, it is a  place every traveler to Jerusalem should visit to learn more about this City of David.