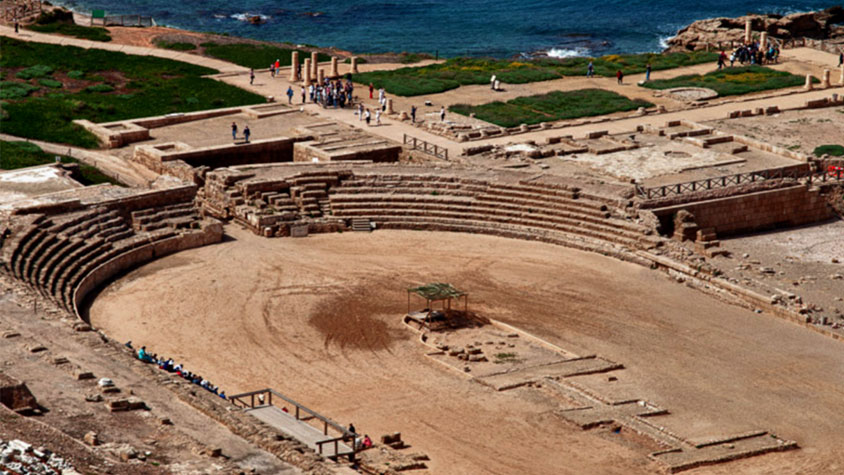 Located on the shore in the center of Israel, Caesarea was the site of one of the most prominent cities in the Roman world. As the previous Roman capital of the province of Judea at the time of Jesus, Caesarea is now home to a large national park and a must-visit while exploring the Holy Land!

Initially being home to a Phoenician naval station (Stratonos pyrgros), the maritime merchants of the ancient world used the bays and rivers to establish a port that flourished during the Greek period. King Herod transformed the small port town into one of the largest cities known to man during the Roman period, naming it after Augustus Caesar (Herod’s patron). The city was populated throughout the 1st – 6th centuries CE and was an important center of Christianity during the Byzantine period, until the Muslim conquest of 640, abandoning the city until returning it to its former glory by 13th century crusaders.

In 1800, Caesarea was abandoned until its redevelopment into a fishing village by Bosniak Muslim immigrants after 1884. After being established as a modern town in 1940, Caesarea was incorporated as a municipality in 1977. Today, the ruins of the ancient city sit on the coastline just 2 km south of the modern Caesarea. After excavations in the 1950’s and 1960’s, the site was adopted as a new national park in 2011. Located within the national park are the ancient ruins of the great city built by Herod the Great when he ruled over the region.

Herod’s Harbor was built using materials that would allow the concrete to harden underwater. The 40-acre harbor could accommodate 300 ships, much larger than the modern harbor can hold today. Herod’s theater was constructed to house a seating capacity of 3,500 and was covered with a skin covering (vellum). According to Josephus and recounted in the Bible in the Book of Acts, this is believed to be the site of Herod Agrippa’s death.

The Promontory Palace, proclaimed to be the “most magnificent palace” by Josephus, was built out into the waters of Caesarea and was home to an Olympic-size pool and an array of other incredible constructs. This palace is believed to be the location where the Apostle Paul was imprisoned in Acts 23:25. The famous Caesarea Aqueduct was constructed due to the lack of fresh water within the area. The aqueduct moved water from the springs of Mount Carmel nearly 10 miles away using its unique arches that allowed water to flow by the pull of gravity.

As well as being home to the Hippodrome, the Pilate stone, and beautiful mosaic discoveries, Caesarea is a coastal region with much to offer!