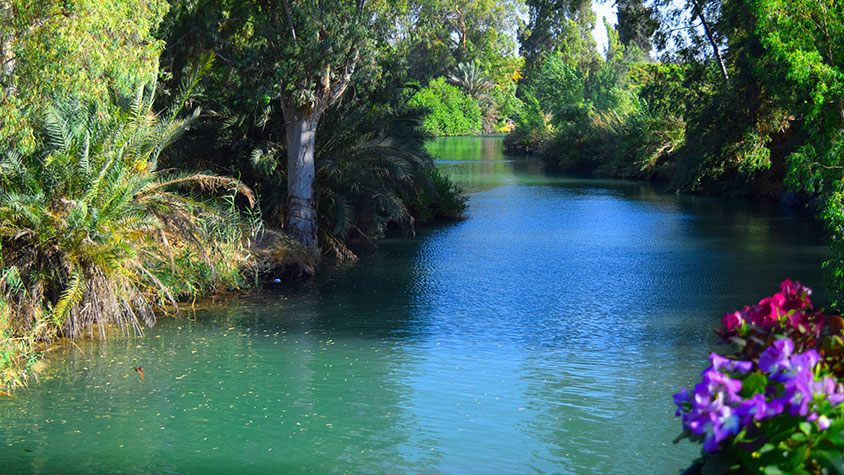 Flowing north to south through the Jordan Rift Valley in the center of Israel, the Jordan River carves an impressive 223-mile path beginning at Mount Hermon, into the Sea of Galilee (Kinneret), and ending in the Dead Sea. It is Israel’s most important source in quenching a dry land. But it is the Jordan’s biblical and historical significance which adds to its importance to the land and people of Israel.

The path of the Jordan—whose name means “descended” in Hebrew—is actually divided into an upper and lower section, which drops in altitude incrementally over its course. The upper section, which extends from Mount Hermon to the Sea of Galilee, experiences its first major drop over approximately 65 miles. It meanders into the lower section, dipping at a rate of five feet per mile. By the time it reaches the Dead Sea, the Jordan has dropped over 3,100 feet, making it the lowest elevation of any river worldwide—nearly 1,400 feet below sea level.

Despite its larger-than-life status, the Jordan is quite small compared to its contemporaries like the Nile or even the mighty Mississippi River—it is only about 17 feet at its deepest point and about 100 feet wide at its broadest. Regardless of its size, the Jordan has been a focal point in the both the Old and New Testaments.

The Jordan is featured prominently in the biblical narrative of Joshua, who led the people of Israel across the river into the Promised Land (Joshua 3-6). Jacob received a blessing from God after crossing the Jordan with just his staff (Genesis 32:10). Prophets Elijah and Elisha crossed the Jordan on dry ground after Elijah placed his cloak in the river, which then parted (2 Kings 2:8). The Jordan is also a place of healing, including that of Naaman the Syrian, who was commanded to immerse himself in the river by Elijah and was healed of his leprosy (2 Kings 5).

Most notably, the Jordan is one of the sites which feature prominently in Jesus’ ministry. It is where Jesus was baptized by John the Baptist (Matthew 3), and is a symbol of spiritual rebirth, repentance, and forgiveness of sins.

Not far removed from the Dead Sea and the ancient city of Jericho, deep in the Jordan Valley, is Qasr el Yahud (translated from Arabic as “Castle of the Jews”), recognized by Christian scholars and pilgrims as being linked with the miraculous event of Jesus’ baptism by John. Jewish tradition also acknowledges Qasr el Yahud as a general location of the Children of Israel’s crossing of the Jordan into the Promised Land.

The site has been refurbished in recent years, and has safe, easy waterfront access as well as ample space for prayer and meditation. Entry is free, but you must make a reservation.

Another popular site for Jordan River baptisms is Yardenit, located near the southern tip of the Sea of Galilee. This area is more commercially popular with tourists but offers the same easy access to the water and is extremely safe, fitted with wheelchair-accessible ramps and handrails. Yardenit is free to enter, but if you wish to be baptized, you must rent a robe.

The Jordan River is considered to be one of the holiest sites in Israel and is an essential experience for those who want to see biblical history come to life.