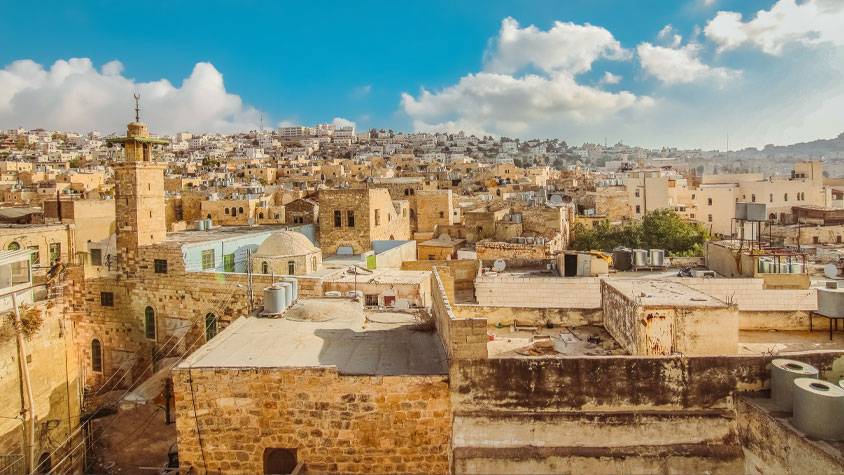 Located about 20 miles south of Jerusalem in the Judean Hills is Hebron, one of the holiest cities in the Holy Land, and the site of the oldest Jewish community in the world. Considered the largest city in the West Bank with a population of roughly 220,000 people, Hebron is contested territory, which makes for a complex political climate. But it is its rich biblical underpinnings that make a visit to this ancient city a memorable one.

Founded around 1720 BC, Hebron—mentioned in Genesis as Kiriath Arba—was first named as the place where Abraham purchased the cave of Machpelah from Ephraim the Hittite as a family tomb (Genesis 23). Genesis goes on to mention that it is here where Abraham, Isaac, Jacob, and their families are buried. And, Jewish tradition also suggests the cave is the resting place of Adam and Eve! Today, this location is known as the Tomb of the Patriarchs and is one the primary sites to visit on tours to Hebron.

The site itself is divided into Jewish and Muslim sections.

Mentioned 87 times in the Bible, Hebron is also where David was anointed king of Yehuda (2 Samuel 2:1-4) and where he reigned for seven years before he was subsequently anointed as king over all Israel (2 Samuel 5:1-3). Centuries later, Hebron would endure many conflicts and invasions, which has ultimately divided the city. After the British Mandate ended in 1948, Hebron was under Jordanian rule. In 1967, it would once again come under Israeli occupation, allowing the Jewish community to reestablish permanent residence in 1979. It is now called home by approximately 800 citizens.

When touring Hebron, visitors will encounter a bustling city, divided into two sections: H1 and H2. The Old City of Hebron contains many Jewish settlements and a military compound. Visitors can also visit the Tomb of Ruth and Jesse, a refurbished site that attracts thousands, particularly on Shavuot. Located in the Tel Hebron neighborhood, the stone tomb sits atop a hill which overlooks a vineyard. Here, you can see excavations up to the present-day which include a small synagogue, a prayer room, and a variety of stone artifacts.

As a bonus, visitors can also enjoy one of the city’s renowned glass and/or pottery factories, with ample time to shop!

If you plan to visit Hebron please plan to dress modestly, wearing clothing that covers shoulders and knees. As with many sites in the Holy Land, visits are subject to weather, time, and local conditions.