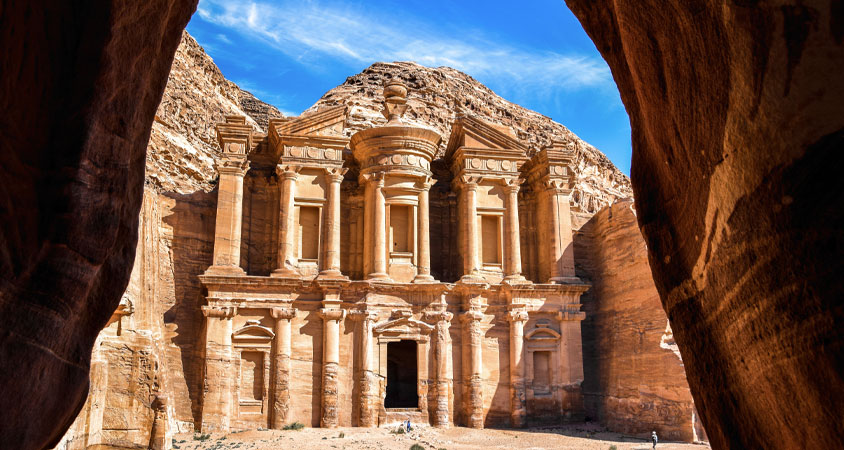 Situated in the heart of the Holy Land, Jordan’s roots are found throughout the Old Testament.

Jordan’s welcoming approach to tourists makes it a popular destination for many who wish to explore the biblical roots of their faith outside of Israel. Visitors will discover well-preserved and easily accessible sites to enhance their journey of a lifetime.

Amman is Jordan’s capital city in the north. This modern city has many hotels, restaurants, shops, and museums. Known as Rabath Ammon in the Old Testament and the Greek city of Philadelphia in the Book of Revelation, visitors can tour the ruins of a Roman theatre, a temple, and Byzantine churches.

Amman was connected to many southern cities by the King’s Highway, a major trade route which connected Africa with Mesopotamia for centuries. It is mentioned in the Book of Numbers where Moses requested passage from the King of Edom to use the King’s Highway (Numbers 20:14-21) during the Exodus but was refused. You can drive this route today.

Visit the beautiful sandstone mountain fortress of Petra, built by the Nabateans and previously inhabited by the Edomites—the descendants of Esau. There are many ways to enter Petra, but none of them are easy.

The main entrance to Petra is called the Siq, a long descending pathway with beautiful sandstone walls on either side towering over 600 feet high.

This gorge and the temple at the end of it (the Kazneh) were popularized in the movie Indiana Jones and the Last Crusade.

As many as 30,000 people lived in Petra during the first century. The city was badly damaged during an earthquake in 363 AD and never recovered. The Western world was unaware of Petra until John Lewis Burckhardt tricked his Bedouin guides into leading him there in 1812.

Just a short drive southwest of Amman is the market town of Madaba, a place best known for its intricate mosaic in the Church of St. George, where you can see a map of the Holy Land, built in the middle-to-latter part of the 6th century.

The city, situated on the eastern side of the Jordan River, is also replete with historical landmarks and stunning landscapes. Several biblical accounts occur in Madaba—called “Medeba” in the Bible (“water of rest”)—Including David’s war with the Moabites (2 Samuel 8:2), the Moabite rebellion against Israel (2 Kings 1:1), and Isaiah’s prophecy of condemnation for Moab (Isaiah 15:1-9).

Just a few miles west of Madaba is the commanding Mount Nebo, the place believed to be where Moses viewed the Promised Land before his death (Deuteronomy 32:48-52). Take in the windswept panorama of the Dead Sea and much of the Holy Land and imagine what Moses witnessed.

You can also visit a 4th century Christian church that commemorates the life of Moses. Inside, you will find detailed and remarkably well-preserved mosaics. Be sure to see the serpentine cross at the overlook, which represents the bronze serpent Moses used as protection for his people in the desert. The cross is a symbol of Jesus’ crucifixion.

Once known as the Salt Sea in the Bible, the Dead Sea was the backdrop for God’s condemnation of Sodom and Gomorrah. A long-standing legend holds that Lot’s wife is among the crystallized rock formations after being turned into a pillar of salt (Genesis 19:24-26).

At more than 1,400 feet below sea level, the Dead Sea is the lowest place on earth and is also a popular tourist destination for its therapeutic waters and highly prized mud, which has been harvested for centuries.

Before crossing back into Israel, you can visit the Plains of Moab, where the Israelites encamped before they crossed the Jordan River.

Close to the border, just north of the Dead Sea is Bethany beyond the Jordan, the location believed to be where Jesus was baptized by John the Baptist.

Jordan is also the home of Lot’s Cave, where Lot and his daughters took refuge after Sodom and Gomorrah were destroyed.

Visiting Jordan will enhance your Holy Land experience. Take a few extra days to experience how these ancient lands connect through biblical history and can make your time in the Holy Land even more meaningful.